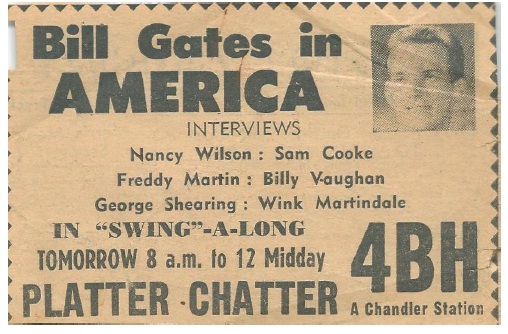 Ken Sparkes – DJ Bill Gates (Swingin’ Gates) is one of my most endearing and long time friends of mine, many a time our career paths and motor cycle, race and road cars choices have run in parallels.

Bill became a legendary DJ in Brisbane with a career that spans many decades encompassing the main Australian Cities and the UK.

His name is synonymous with one of the worlds top music stars The Bee Gees. Like all young struggling artists they needed that first “leg up” on the rung that you climb up to stardom. There have been many stories over the years about how that all happened and how they became The Bee Gees.

Recently Bill decided to write his history for his family, a personal insight into his career and life and has kindly shared this with me and allowed the use of many of his stories that span over five decades.

During his time as a DJ in Brisbane one of his shows was sponsored by Bill Goode owner of a successful construction company and involved with Redcliffe Speedway, Bill picks up the story.

“Bill (Goode) invited me to take part in a Charity race one weekend and it was there that I first heard the harmonies of the Gibb Brothers, Barry, Robin and Maurice. They were singing over the public address system in between races and Bill Goode and I were impressed with their natural talent. We agreed to help them and after talking to their parents, Barbara and Hugh, arranged for the boys to come in the following weekend to the 4BH radio auditorium to record a song or two so as to evaluate their potential.  The acetates we cut during that afternoon were so good I put them on air in my next show and the phones started to ring. (Acetates – a sound recording disc comprising of acetate lacquer coated onto an aluminium base used mainly for short term use and demonstrations)

Barry 14, Robin 10, Maurice 10, Bill Goode and I met with the Gibb family and settled on the name –The BG’s- for the boys.  At that time I was calling myself, “BG on BH” (4BH) and it was noted that at the meeting were, Bill Goode, Bill Gates, Barry Gibb, Barbara Gibb ( Mother) and the Brothers Gibb( Robin and Maurice) and it was suggested that the B.G’s would sound okay. 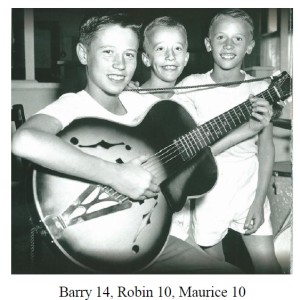 Later it was changed to The Bee Gees.

On the 15th of March 1959 Bill Goode and I signed a contract with the group receiving a third of their earnings at that time. We bought them a guitar and got them as much work as we could around Brisbane but as they were so young opportunities were very limited.

I sent copies of the songs to Bob Rogers (then at 2UE) in Sydney and he had a great response to them too.

Eventually Hugh (boys Father) decided to move the group to Sydney in the hope of finding more work and recording opportunities and since we couldn’t help them anymore Bill Goode and I relinquished our contractual agreement with the boys and wished them well-never dreaming of course that they would become one of the most successful and enduring super groups in the history of popular music.

Bill Gates and the Bee Gees

Ken Sparkes. Bill caught up with the Bee Gees during his time in London and recalls a day that stands out in his memory to this day.

Bill picks up the story;

“Then there was the day we filmed Barry Gibb of the Bee Gees. At the time Barry lived in a penthouse apartment in Fleet Street near St. Paul’s cathedral. The group had just released their album ‘Odessa’ and there was a great song on it called ‘The First of May’, and I wanted to film Barry singing the song as he strolled through Hyde Park, accompanied by his huge Pyrenean mountain dog. We couldn’t all fit in my car, so Barry drove his Rolls convertible with the giant dog in the back seat. It was a beautiful day so Barry had the hood down, and motored off towards Hyde Park with me following in the Alfa (A little 1750 GTV). We approached Piccadilly Circus and when Barry stopped for a traffic light his huge dog jumped out of the car and took off, scattering pigeons and weekend tourists in all directions. Well, Barry couldn’t get out and chase the dog, because he’d be mobbed immediately, so he continued on while I chased the dog. I finally dragged it back to the Alfa, and literally rammed the dog into the little car with not an ounce of room to spare. The dog was a friendly soul and gave everything in the interior of the car, including me, a thorough licking, before we arrived at the location and shot the scene.”

Ken Sparkes. We have concentrated on the Bee Gees but there was another important member of the band Colin Peterson who also part of Bills story in London. 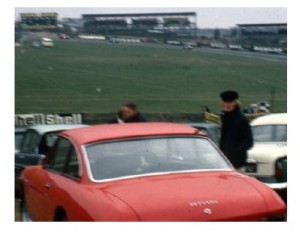 Colin shared my passion for motor racing and had a quad headlight 330GT2+2 V12 Ferrari as well as an incredibly quick Broadspeed mini with a lightweight fibreglass shell, crossflow heads and all the trick gear. I remember driving the Ferrari up the freeway to Coventry for a service, with Colin blasting by in the Broadspeed, and we went together to the motor races at Brands Hatch on several occasions.

Colin Petersen and his wife Joanne lived in an attractive mews in Queensway. Joanne had previously been Brian Epstein’s secretary during the success of the Beatles and had some interesting tales to tell about the Fab Four. I spent many a night with the Peterson’s and their friends, Slim and Freya Miller, playing Monopoly and sipping Beaujolais. Freya and Slim had an artist management business in the same building as Spike Milligan and other British legends. They were looking after the New Seekers at the time and after Slim passed away Freya became the impetus behind the amazing success of Shakin’ Stevens. Slim was also a first rate stag comedian and on a couple of occasions, when his old mini van was kaput, I drove him to gigs out in the country. They were mostly at football clubs and the routine was that a comedian would tell a few naughty jokes then the strippers would come out and wiggle around for a while then another comedian would take over and so on – things would get more and more raunchy as the evening progressed.

In 1997 The Bee Gees connection came up again and Thames Television rang and asked me to fly to England and take part in the Bee Gees ‘This is Your Life’ with Michael Aspall which featured a host of stars including Barbra Streisand, Michael Jackson, Diana Ross, Kenny Everett and many more. It was a wonderful experience, although I spent more time in the plane than on the ground in England. I also had the honour of inducting the Bee Gees into Australia’s Rock’n’Roll Hall of Fame on TV’s Aria awards in 1997. 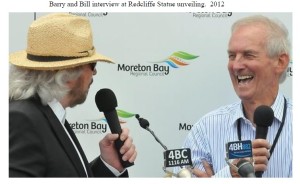 After finishing a stint as consultant for Macquarie Network’s 2CH late in 1999 Donna, Matt and I travelled to Los Angeles, Las Vegas, New York, Miami, Orlando and Waikiki, meeting with Barry Gibb and his lovely wife Linda at their home in Miami Beach – the amazing Maurice came over to say hi too – and attending the NAB radio show in Orlando.

I have stayed in touch with the Bee Gees over the years, they visited our home on the Gold Coast during a tour and in August 1999 we visited the Gibb Brothers at Barry and Linda’s (wife 44 years September 1 2014) home in Miami Beach (USA) and had a great time reminiscing about the good ole days.

In 2006 Barbara Gibb visited Australia and came to our home on the Gold Coast and once again we enjoyed talking about her sons amazing achievements and other music legends she knows so well.

In 2013 when Barry toured, we joined them at Redcliffe Speedway 53 years after we first met and then took the whole family out for a day cruising the Gold Coast Broadwater and also caught up with them for a couple of days in Sydney during their visit.

The whole Gibb family are wonderful down to earth people and great fun to spend time with.”

Ken Sparkes. Bill Gates is one of the most unassuming and talented Radio/TV personalities I have had the honour to know and call friend. He is a non drinker, non smoker and still very fit and active and if you live in his area on the Gold Coast you may catch him paddling around the canals as part of his exercise regime. Yes he’s still involved in our crazy industry, as a Media Strategy consultant.

This has been only part of his story and in the future we’ll return to hear more of the behind the scenes stories of his life in the fast lane of motor cars and stars first hand by Bill Gates.