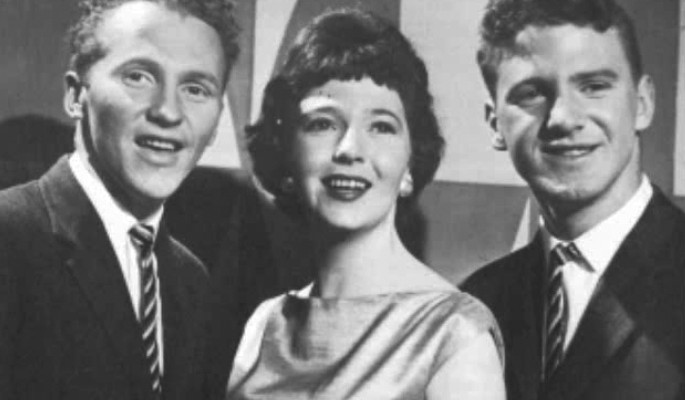 The Flanagan’s were a serious part of the Australian music history and appeared on every major Australian TV Show including 6’O’clock Rock, Bandstand, Teen Time, Music Time, Star Time with John Laws, Revue 61, Revue 62, Mavis Bramston Show, Stuart Wagstaff Show, Magic of Music, Say it with Music, Don Lane Show to the iconic Graham Kennedy and Mike Walsh shows on Channel 10 and Channel Nine. That would only be the tip of the iceberg when it came to shows.

They were on every TV Network and in real terms one of the most sought after TV and Stage groups. You switched on your television to watch any major musical TV event there were the Flanagan’s who always came up with a new performance, extremely reliable, note perfect and made the audience extremely comfortable. In their first 20 years they would chalk up over 1000 TV performances.

1959 Paul, Margaret and Peter Flanagan started out as The Fauns and in a very wise move decided to take their family name Flanagan to headline their career and eventually became household legends.

The first song they performed on TV was a soft melodic #1 Billboard hit that was also performed by a USA trio The Fleetwoods, but there were two points of difference, The Fleetwoods were two girls and a guy and not related. Plus The Flanagan’s could definitely match The Fleetwoods harmonies.

If you get a chance seek some of The Flanagans performances and you will hear the magic of their individual talents and they could perform live extremely complicated and wordy acts with no cue cards.

1966 The Flanagan’s first record “Follow the Wind” was written by a very young Barry Gibb especially for the trio, no doubt he admired their work. The flip side “The Land of Beyond ” became a bigger success and voted by Radio 6IX Perth as the winner of one of the first, if not the first Radio award “The Golden Microphone” as the best song of 1966.

1979 The Flanagan’s celebrated 20 years in show business on the Nine Networks Mike Walsh show and again the six minute concept, arrangement and overall presentation was from the mind and talent of Peter Flanagan. Title? Simply “20 Years.”

The Flanagan’s really shone in the RSL and Football Club scene and there would few that they did not cover. Unfortunately today the once thriving Club Entertainment scene is not what it was back in those wonderful entertainment filled days that exposed Australian talent.

Peter was the youngest with a shy retiring welcome smile and the trio not only enjoyed Aussie success but sell out International audiences, going to places few if any OZ acts had explored. They really laid the ground work for the many future Australian.

Theatrical Agent Brian Fogarty (who has booked more Australian and overseas acts than he can remember) paid this tribute;

“Peter was part of the exceptionally talented Flanagans who wowed audiences in Japan, Okinawa, Guam, Taiwan and South East Asia and many will remember them in Sydney at Eric Duckworth and Bill Orrs Doncaster Theatre and the Manly Music Loft which they eventually purchased”

One standout part of The Flanagans was the Medleys of Broadway and Londons West End Shows and in many instances performed the songs well before they became known in Australia.

Peter later said, “We’ve sung a medley about just about everything and everybody.” In speaking with Peter’s sister Margaret and Brother Paul, they were a tight family and they especially heaped praise on Peter. Whilst Margaret and Paul had their nose to the grind stone learning singing and playing classical and what is termed serious music, brother Paul said, “Peter would come home with records by USA groups such as The Four Lads, lock himself in his room and they could hear him working out harmonies.”

Eventually, with none or the classical or music training of his siblings Peter would elevate himself to scoring arrangements for 44 piece orchestras.

My brother had a beautiful and gentle nature, Paul and I learnt classical singing and piano but Peter learnt nothing. However he was self taught and developed an amazing musical ear. Peter did all our arrangements over the 43 years we performed and there was not one argument and he never sought an extra money

Peter was an amazing talent but most of all a loving and caring brother.

Brother Paul who today teaches music and very dedicated to his students said of Peter, “He was an amazing humble genius.”

Peter Flanagan passed away 11 am September 2 2014 and will be remembered as part of one of Australia’s most loved and extremely talented groups Paul, Margaret and Peter, The Flanagan’s.