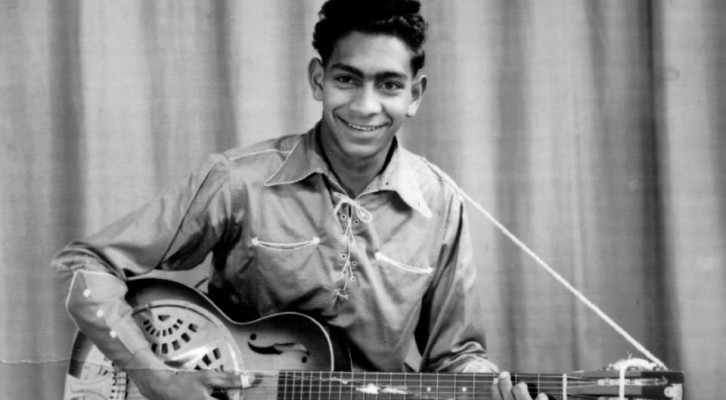 There have been some “special” entertainers I have met during my time in Radio and Television, one that stands out is Jimmy Little. Jimmy was an inspiration to all who have shared parts of his life and his saying, “Do not confuse gentleness with weakness” sums up the man so many admired.

James Oswald Little was born March 1st  1937 at Cumeragunga Mission Settlement and described himself, in his well known humble fashion, as a “Yorta Yorta” man. (Name of his Tribe)

From 1951 he started on the path to becoming one of the most loved entertainers in the Australian music industry and eventually described as a “Living Treasure ”. You will go a long way before you’ll meet too many performers described in that term. Jimmy met Pat Ware who would become an integral part of his career and life.

It’s interesting to note that one of his earliest music influences was American Country music legend Jim Reeves who was known as “Gentleman Jim” a title that would also be bestowed on Jimmy Little. Both shared a common smooth melodic style and having met and interviewed Jim Reeves I can see the similarity.

Jimmy is acclaimed as the first Aboriginal entertainer to appear on Australian National TV and in 1959 performed on Channel 7’s Keith Walsh Tonight Show. Keith was also the host of the successful “Teen Time” show and that appearance opened up the world of Aussie TV, Nine Networks Bandstand, ABC’s 6 O’clock Rock and 7’s Sing Sing Sing. Eventually there is not one TV show I can think of that Jimmy was not a featured performer on.

I first met Jimmy in Mudgee NSW when he was touring with Col Joye and the Joye Boys. He joined Col in the studio of 2MG for an interview session and from then on I continually met with him during Television performances. My first impressions never wavered over the decades.

Jimmy Little’s big year came in 1963 and he won his first Gold Record with “Royal Telephone.”  Jimmy stunned the so called experts when Royal Telephone topped the charts. Who said you could not go to #1 with a Christian song! His performance of the song on the Nine Networks Bandstand was a stand out with his warm, no fuss approach to the cameras. On the same show he also sang, “Little Bitty Tear” (written by Country great Hank Cochran) that was a Burl Ives hit. Ironically Burls first record in 1959 was entitled “We Loves Ye Jimmy.” Burl Ives was one of the most successful balladeers of the fifties and sixties eras along with major film successes.

“Royal Telephone” and “Little Bitty Tear” are featured on our Jukebox Saturday Night Rock and Roll Heaven tribute to Jim.

He was adventurous when it came to selecting songs to record, for example when seventeen year old Barry Gibb wrote “One Road” Jimmy was one of the first to record a Barry Gibb composition in 1964.

Along his trip through life he befriended many stars including Country Greats Marty Robbins and Charlie Pride, later actor Jack Thompson and Kylie Minogue to name but a few.

He performed at a Royal Command Performance before the Queen Mother, unfortunately I could not find any photos of this event.

1964 the enormously popular teen magazine “Everybodys “named him Australian Pop Star of the year, a great achievement as there were many local stars who coverted that title. Jimmy’s career continued with films, concerts, headline events, television, radio and making music.

April 2 2012 “Gentleman Jim” lost his battle with kidney disease and joined his ancestors.

He was named a “National Treasure” and honoured with a State Memorial at the Sydney Opera House. Family, friends, performers, fans and dignitaries packed the landmark to pay their final respects to James Oswald “Jimmy” Little AO.

His life achievements go beyond music and into the heart and soul of the Aboriginal Community.

His music and memory lives on and if you want to support Jimmy’s great work through The Jimmy Little Foundation, please go to www.jlf.org.au it is something he’d like you to do.

“Do not confuse gentleness with weakness” Jimmy Little.