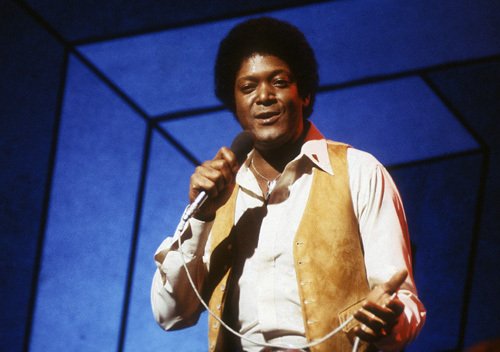 In 1965 a song hit the jukeboxes by Dobie entitled “The In Crowd” it happened at the start of the disco craze so very timely but took up to late 1972 for Dobie to make a real big hit, the classic “Drift away.”

Like many in the USA who became famous, his early musical education revolved around singing in the local Church and his Grand Father was instrumental in encouraging Dobie to become a singer. Even in more recent times Michael Buble’s Grand Father took him around as a lad performing any place who would accept his grandson.

The road to fame was not easy and Dobie even changed his recording name three times before becoming Dobie Gray. Sonny Bono (Sonny & Cher) then with Speciality Records, signed him to his first single “Look at Me” It was a mild success there was even a now long lost single “See you at the Go Go” that release had the same feel to the song that became a hit for Dobie “The In Crowd.”

I saw Dobie Gray in the Los Angeles production of HAIR (he starred for two and a half years) and interviewed him for my then radio Station KGBS 1020AM FM 97. Dobie was a natural talent and very easy person to be around, He toured all over the world including Australia in the 1970’s
For those who cannot remember Dobie’s hit song they may recall the 1981 commercial Drift Away when it was used in a chocolate bar commercial.

Born Lawrence Darrow Brown in the Houston Texas area USA, Dobie Gray passed away December 6 2011 at his home in Nashville Tennessee and will be remembered for the being a top performer and very respected singer and of course the jukebox favourites ”Drift Away” and “In Crowd.”