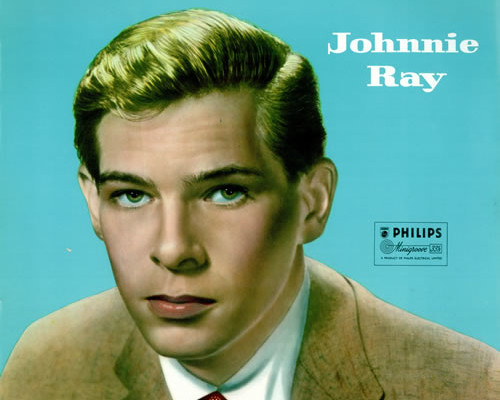 John Alvin Johnnie Ray was born in Oregon USA January 10 1927. He was 24 when he started to dominate record sales and became one of the worlds most sought after performers. He starred alongside the famous American entertainer Ethel Merman in the hit movie “Theres No Business like Show Business.”

Johnnie sent teenage girl’s wild before Elvis became a big star and it’s rumoured that he influenced the King. Johnnie’s emotion charged hit CRY hid his semi comedic “over the top” side of his character, as seen in a film clip performing the song that later would be a hit for Elvis, “Such a night”

Johnnie Ray had a huge fan base in Australia, in 1954 he set an all time record as Australia’s best seller and it was not until 1964 that the Beatles beat that feat. One of our biggest music stars Lonnie Lee has even developed a special stage tribute to Johnnie Ray.

Johnnie was Deaf in right ear from thirteen from a Scouting Accident and later lost most of his hearing in the left ear but nothing held him back until his lifestyle finally caught up with him.

Johnnie was featured in the Dexys Midnight Runners film clip in their 1982 hit COME ON EILEEN. 1989 would be the last time we would see him perform in Australia. Twelve months later he died of liver failure attributed to alcohol.

There is no doubt many fans wept at his passing into Rock and Roll Heaven the great Johnnie Ray.