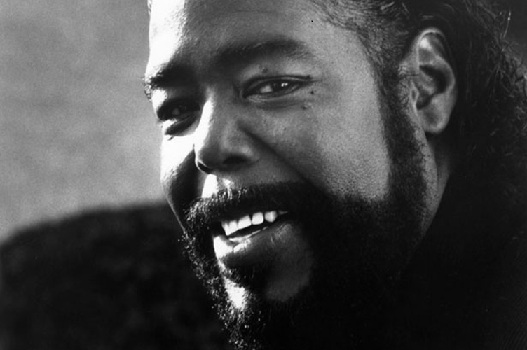 In the Seventies Barry White combined suggestive story lines, great dance rhythms and a sexy deep manly voice and very few record buyers at the time did not have at least one Barry White production in their LP collection. In the seventies he received enough Gold Records to fill Fort Knox
Someone wrote, “You’d never know how many of today’s generation were conceived by his performances.”

Barry Eugene Carter was born in Galveston Texas USA September 12 1944 unfortunately in his early life he had a very squeaky voice until it cracked in his teenage years, then his mother cried when his voice deepened and said, “My baby boy had become a man.”

Barry’s early teenage life was overshadowed by his gang life that ended in a jail term and after serving time the penny dropped Barry mended his ways and filled his brain with music. Barry said years later, that during his time in prison he listened to Elvis Presley’s “It now or Never” and it had a great influence on his attitude.

In 1972 he created Love Unlimited and 1974 the classic “Love Theme” kicked his career into high gear. I used his “Love Theme” as the intro to my live DJ days at the origional “Love Machine” Disco in Toorak Melbourne, it really set the mood.

Barry White was a Writer, arranger, orchestra leader and even a successful Voice over actor. One of his later career highlights was to appear with Luiciano Pavarotti on Stage and if you ever find the Tina Turner and Barry White 1996 “In Your Wildest Dreams” CD that is an experience.

Barry White was a big man, around 375 pounds in old terms and when we saw him perform at the Entertainment Centre his entire act was done from a stool. Yes his lifestyle also caught up with him and Barry Eugene (Carter) White passed into Rock and Roll Heaven “Love Section” July 4 2003 in LA.

Few who lived through the seventies will ever forget Barry White.