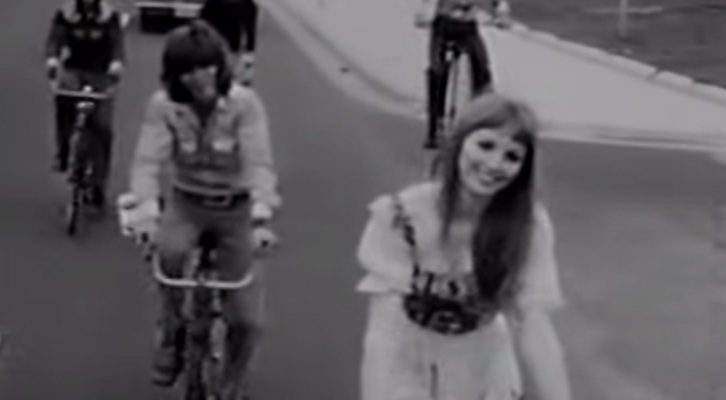 The Mixtures – The Pushbike Song

The Mixtures The PushBike Song

One of the most successful OZ bands in the sixties was The Mixtures who recorded the stand out hit “The Push Bike Song” The Channel Ten film crew  took to the streets of Melbourne and filmed a clip that today would not even get out of the car park. The HR and fun Police would not have Okayed it and branded it too dangerous (without closing off the entire city). The clip featured a young and very attractive Melbourne model, Monica Hughes who was an important element to the clip. Her main fear while filming was getting her long skirt caught in the wheel or bike chain. Our fear was that they would all get run down by the traffic on St Kilda Parade.

Monica went on to represent Australia in the Miss International Pageant in Osaka Japan and did her country proud. Not only being hailed for her beauty but diplomacy. 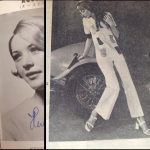 During the telecast of a special Fable Label special I asked on JBSNight if anyone knew who she was. The answer did not come from anyone connected with The Mixtures or the record Label, but, the lady herself! It absolutely amazes us just who watches the show, the diversity of our audience with one thing in common… Real Music. The mystery girl was revealed and since then we have corresponded and she has kindly sent in many photos. Her name is now Monica Martini (nee Hughes) and here from her private collection some of her sixties fashion shots, you will all agree she is stunning. The “Twiggy” inspired mini skirt craze had hit Australia and Monica stood out as she followed the craze and this gal was world class.

Monica married Frenchman Pierre Martini they had three daughters and one is Celebrity Chef Karen Martini, her other daughters are the lovely  Justine and Odette. 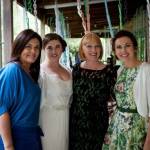 Monica re-enacted her push bike ride years later donning a blond wig and riding around Melbourne on her birthday.

So you never know who’s watching JBSNight and there are several other mystery appearances from girls and guys who have appeared in music film clips (and we yet to discover their identity).

Thank you Monica you are as lovely today as you were yesterday. Take a well-earned bow… we appreciate you sharing the story with us.

If anyone else featured in a clip of yesteryear… feel free to say G’day to us!