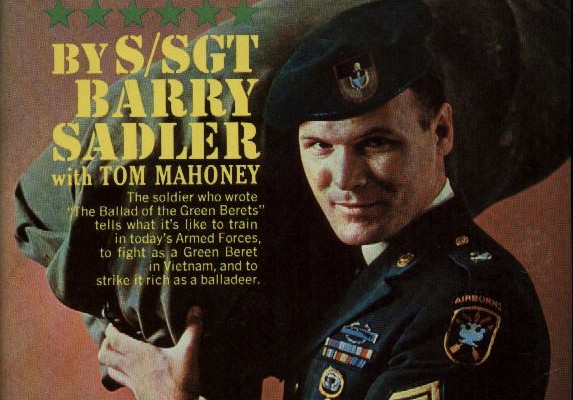 The Ballad of the Green Berets.

First up let me give you a disclaimer. We do not wish to glorify war but to pay tribute to the brave men and women who serve their country. Especially some mates currently serving in the SAS and they know who I mean.

Back in 1966 The Beatles, Monkees and Frank and Nancy Sinatra all had huge hits but the surprise #1 hit came from the ranks of the US Special Services known as The Green Berets.

Staff Sergeant Barry Sadler served as a medico in Vietnam and in May 1965 he was severely wounded while on combat patrol by a booby trap containing faeces covered punji sticks. He survived and returned to the US and recorded “The Ballad of the Green Berets” that spent five weeks as #1 on the Billboard charts.

The hit became the theme for the 1968 John Wayne movie The Green Berets.

Barry was highly decorated but unfortunately met a very sad end to his life, he was shot in the head in Guatemala flown back to the US by his friends and eventually passed away Nov 5 1989 aged 49.

He left behind a library of successful books and the hit that is still an inspiration to many who follow a military career and proved that even from the ranks of military men and women they can take on the big hit makers.