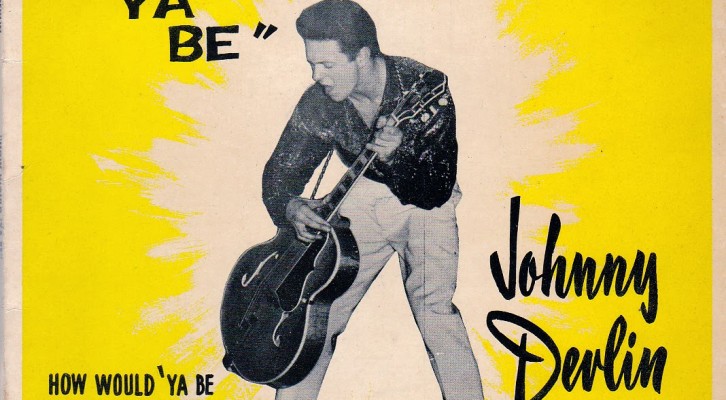 Johnny was one of the three New Zealanders who burst onto the Aussie music scene in the early sixties. He became a regular on Channel 9’s Bandstand hosted by New Zealand born Brian Henderson. In the early part of his career he was portrayed as one of the bad boys of music and earned the nickname “The Satin Devil” possibly picked up from the name of his backing group The Devils. Some called him the Johnny O’Keefe of New Zealand.

Those of us who knew him during this period found him far from a devil but a dedicated full on performer. Australian manager the late and great John Collins made sure that his records were at every radio station even our humble 2MG Mudgee. If you’re a real collector you may even have one of Johnny’s cardboard records, from memory another John Collins initiative.

Johnny Devlin is now in his senior years and a close friend and supporter Alan Dale contacted JBSNight to inform us that John is in St. Vincent’s Hospital awaiting a triple by-pass. No doubt all the music performers and fans who admire John’s ability and history will join in wishing him a speedy recovery. Wonder if “Hendo” will pay him a visit?

Last news, the operation was a success and John is in rest and recuperation – Keep on Rockin John!

For those interested you will find many of his performances on The Best of Bandstand series in volumes 1, 2 and 5 available here in the DVD section HERE