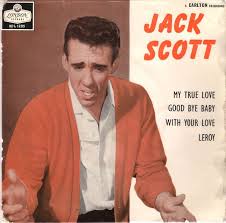 When you go back over the charts you will not find too many mentions of Jack Scott on the OZ charts, however, if radio spins counted for something Jack Scott would be in the top 10. The other point is that those early OZ 50’s and 60’s charts were very unreliable and inaccurate (even today itunes charts are manipulated by record companies buying artists into top 10 to generate awareness and drive real sales).

Jacks’ biggest and most memorable hit is “What in the worlds come over you?”. His deep resonant tones made him turntable welcome and many of us DJ’s played the vinyl through to the turntable felt or rubber. He most likely inspired DJ’s including me to record, as we could sing in his key.

Jack Scott was born in Ontario Canada but jumped across the lake to settle in Michigan and was adopted by the locals. In the USA he charted no less than nineteen singles and was in the billboard top ten with four of the releases. He also wrote most of his own material.

Jacks’ Dad migrated from Italy and learnt English listening to the radio. Jacks’ birth name was John Scafone and  sounds like something out of the God Father.

In 1952 a local DJ spotted singing with his sister at a High School event. He took him under his wing, suggested he change his name and featured him on his weekly radio show that saw many guests including Webb Perce, Carl Smith and Marty Robbins. This gave the young 16 year old a chance to mix and meet famous stars and no doubt their Country music rubbed off onto him.

By the mid fifties he had his own band The Southern drifters and saw how the teenagers were taking to Rock and Roll. He became influenced by Elvis Presley and developed what became known as ‘The Jack Scott Sound’.

1957 he cut two of his compositions ‘Baby She’s gone’ and ‘Bet your bottom Dollar’, but did not set the charts on fire. It took record company executive Joe Carlton to unlock the key to his future success. Jack had written a song dedicated to a mate named Crease ball. Carlton suggested a name change and when Jack was in the men’s toilet that he’d seen written on the Wall “Leroy was here”. So he changed the name of the song to Leroy, the flip side “My True Love” which was dedicated to his girlfriend. Jack appeared on American bandstand with ‘Leroy’ and in the meantime another DJ did what many of us did and played the flipside also known as the “B” side. “My True love” went to #3 on the Billboard chart and ‘Leroy’ reached #5, so Jack Scott had a double sided hit.

Meanwhile back in Sydney, DJ’s played ‘My true love’ and again the audience voted it their favourite. I can never ever recall playing ‘Leroy’ nor for that matter any other wireless record spinner.

1959 found Jack in the US ARMY but owing to an ulcer he was honourably discharged May 1959. Jack became a regular on Dick Clarks Bandstand and toured the USA with Dicks “Caravan of Stars’ live concert shows. Jack did not warm to all the touring, had a misunderstanding with Dick Clark left the tour and in 1960 recorded his signature hit “What in the Worlds come over you” that hit the Top ten.

Dick never carried a grudge and invited him back on the TV show. His recording career was a full on bouncing ball, from Top Rank he went to Capitol records then Berry Gordy wanted him to join Motown, but country great Chet Atkins won him over to RCA Victor. Despite Chet’s guidance, Jack did not become a major Country star but was recognised in Europe as a top Rockabilly act.

Never did see him live but there is favourite story around the industry about the time he followed Little Richards huge on stage ensemble and Little Richard ran overtime leaving only moments for Jack and his 4 musicos milliseconds to make their way through the on stage gear and start his performance. Story goes that they blew Little Richard into the weeds. No wonder he has been voted into the Michigan Rock and Roll Hall of fame.

Jack Scott was not a one hit wonder, but a highly respected singer/composer who helped so many of us DJ’s to fill the airtime with his talent.

Yes there is biography and website jackscott music.com if you want to explore further the career of this Canadian performer.