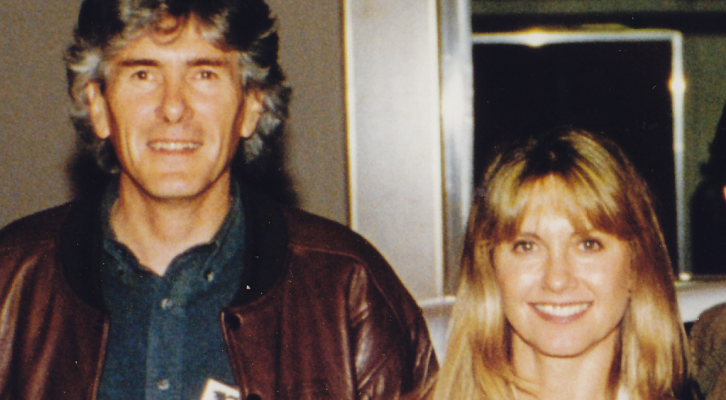 (Peter McKay is a motoring and motor sports journalist who briefly in the distant past wrote about rock music. Peter is a close friend of Ken Sparkes and has graciously taken some time out to reminisce on his experience of music in the 60’s – we hope this sparks a few memories for you as the crew at JBSN very much enjoyed the read.) 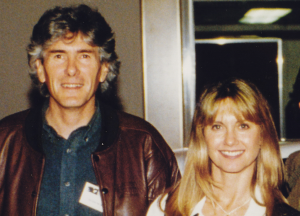 There are so many good reasons why we miss the 1960.  We left our homes unlocked because others respected the property and possessions of others.   Dads worked while mums stayed at home to take care of the kids.  The Kingswood was the family transport of choice but kids walked to school, or rode their Malvern Stars.  The school system supplied the children with small bottles of warm milk, allegedly because it was good for us. Our bathrooms cabinets held Brylcreem, Californian Poppy and Old Spice. Jack Davey and Bob Dyer were the kings of radio. Television telecasts, in glorious black and white television, stopped at midnight. Only ex jail birds and some daring sailors got tattoos – aka body graffiti.  Back then, rock stars dressed to impress and could never be mistaken for bums.  Australian motorists enjoyed prima facie speed limits and there were no such devices as speed cameras.   Sporting stars of the day were true role models; people like Betty Cuthbert, Rod Laver, Jack Brabham, Lew Hoad, John Landy, Polly Farmer, and Reg Gasnier…   Obesity was a rarity rather than an epidemic. Women were satisfied with whatever nature gifted them. It was a glamorous decade pre-dating plastic boobs, butt lifts and botox. The happy folk of the 1960s didn’t have to deal with greedy wolves of Wall Street, global terrorism, shock jocks, reality TV and rampant intrusion of mobile phones. Political lobbyists had not been invented.   Pubs and clubs closed early so we could get a bus or train home. And the music was magical, vibrant, memorable….  Okay, we shouldn’t live in the past.  But let’s respect it, and remember it with a smile.

Never got to see Elvis Presley live.  Nor Little Richard.  Nor Eddie Cochran.

But I did see many of the world’s biggest rock acts of the 1960s including The Beatles and the Rolling Stones. And Chuck Berry and Jerry Lee Lewis… 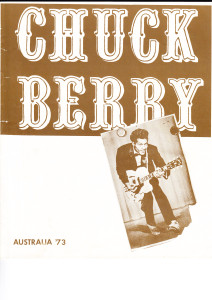 His legendary vocal gymnastics, honed as a demo singer back in the United States, turned his live performances into a soaring, melodramatic smorgasbord of his broad talents. It no doubt helped that when doing demos he uncannily assumed the technique and singing styling of the target act.

His huge, soaring voice boomed around the old tin shed that was the Sydney Stadium, a pony tailed vision in a tight purple velvet jump suit prancing around to the revolving stage in a wild visual treat that took some cues from James Brown.  On the back of the souvenir programme, I scrawled down his repertoire – a free-ranging play list including I Believe, Donnie Brooks’ Mission Bell, Somewhere, Hold Me and other tunes a much younger me didn’t recognise.  Proby had arrived in Australia shadowed by controversy.  Back in England, parents were outraged that his trousers had split on stage, showing…bare…leg!   Here, half a world away, Proby wasn’t about to let the wowsers off lightly, launching into rambling tirades between songs.    “You’ve come to see me perform, not reform,” he suggested cheekily.

Now, almost half a century later, I am unshakeable in my belief that the self-destructive, hard-living Proby could have been one of the greats.   He could sing any damned thing, when he had his heart in it. 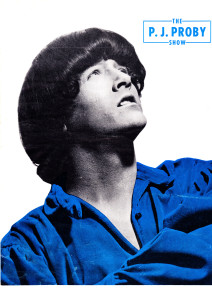 The Beatles tour of Australia in 1964 was remarkable on so many levels. I saw two shows back to back at the Stadium and emerged with a raging headache after a confrontation with Beatlemania. The Fab Four’s show was a performance drowned by screaming teenagers – boys as well as girls, with pandemonium levels appropriate for the biggest music group before or since.  But visually, it was really four mop-topped young men in suits doing not very much except sing and play. 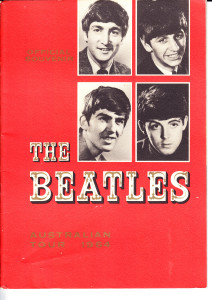 The Stones was a way livelier, dirtier, louder band in 1965 at the Sydney Showground.  All those great earlier songs and raw musicianship before Brian Jones drowned and the rest segued into the wrinkled parody act of today.  So good back then; not so now.

On the same bill on that 1965 tour was Roy Orbison, a human statue with towering vocals and a presence.

Starring at another Lee Gordon Big Show, the Who (with Moonie, Pete, John and Roger) assaulted the Stadium crowd with a brutal stage act and ear-blasting volume. Yes, we got the smashing finale too.   I caught The Who more recently at an Australian Grand Prix concert and then in Sydney a couple of days later, with survivors Roger and Pete joined by worthy younger players.  They were marvellous, avoiding slipping into the embarrassing try-hard approach of Jagger with his manic, over-done knees-up thing (chill, Mick…you don’t have to constantly remind us that you’re very fit for an oldie), and the living dead exemplified by Keef.

Others rocked my young world back then, none more than the spirited Small Faces fronted by the irrepressible vocals of Steve Marriot. Their Itchycoo Park, All or Nothing and Tin Soldier remain prominent on my iPhone play list.  Classics of rock. Memorable too were the Yardbirds with Jimmy Page, the Walker Brothers, Paul Jones, and  the under-rated Crispian St Peters, who left us with some classic pop (Pied Piper; You Were On my Mind).

I saw another of my schoolboy heroes, Jerry Lee Lewis, outdoors at White City but at a time when The Killer was lost in his country phase.  It didn’t quite do it for me.

Chuck Berry has an amazing body of work, and remains one of the more influential rock pioneers of the past 60 years.  When I saw him in Sydney in 1973, he didn’t rip into his set of hits like the crowd expected.  He looked like he needed a recharge.

The best of the locals –

Early Australian rock acts were copy cats aping the big American performers of the last half of the 1950s, but they quickly generated their own star power.

The Easybeats pumped out a string of memorable Vanda-Young hits in the mid 1960s supported by an energetic stage act centred on the mesmerising front man Stevie Wright.  Wright subsequently enjoyed a short run of solo success before falling to the temptations of the music industry and spiralling into the abyss of chronic health issues.  Sad.

Little Stevie defied the odds and outlived many of his contemporaries including Ray Brown, Gerry Humphreys of the Loved Ones, Bon Scott,  Dig Richards, Maurice and Robin Gibb, Noel Widerberg of the Delltones, Mike Furber, Laurie Allen, Lynne Randell,  Jon Hayton of the R’Jays, Peter Allen of the Allen Brothers, Ray Hoff…

And a couple of other giants.

Back in the day, Johnny O’Keefe was an unstoppably frantic live performer although I’ve always thought the challenge of holding a tune was sometimes beyond his limited vocal powers.

Billy Thorpe was a magical mix of singer, musician and performer, an enduring talent who evolved and matured as the music scene went through change.  Those fortunate enough to have seen him (and various iterations of the Aztecs) live in the 1960s and through to his untimely death know they were seeing someone special.  Thorpie could rock it out as well as anyone and still hush a room with Over the Rainbow. I saw him play Dee Why RSL eight days before he died, and his powers had not diminished one bit.

Early Col Joye and the Joy Boys music was a soundtrack to my school days.  Rockin’ Rollin’ Clementine, Oh Yeah Uh-Huh and Yes Sir That’s My Baby…gold!  Saw him and the Joy Boys rockin’ it out in Perth, replete with white buckskins imported from the US.  But then Col fell under the soppy, middle-of-the-road influence of Bandstand and I moved on to other heroes.

Normie Rowe’s strong association with the rocky Shakin’ All Over and his pigeon-holing as a teenbopper idol in the 1960s possibly meant some Australians didn’t recognise what a stunning, controlled tenor voice he had.  And has.  Listen and appreciate the vocals on Que Sera Sera, Ooh La La, and It’s Not Easy. And as he moves towards his 70s, the former King of Pop remains in fine voice.

I always rated Lonnie Lee after Starlight Starbright, and I Found a New Love.  I didn’t manage to catch him live until the Long Way to the Top revival concert in 2002.  His voice was as strong and flexible as ever.  Then I saw his club show in 2013, and was again bowled over by the quality of his vocals, aged 70-plus.

Ronnie Charles, formerly of The Groop was another great rock and blues singer of the best decade in music. Women You’re Breaking Me is one of the great Aussie songs of the ‘60s.  Ronnie is still going hard, as is one of his hit-making band mates from way back, that splendid songwriter/vocalist/keyboardist, Brian Cadd.  Premium quality both.

Russell Morris proved to be another with staying power for half a century, going solo after leaving Somebody’s Image to record the timeless The Real Thing, definitive psychedelic pop remembered too as one of Johnny Young’s song-writing gems.   Wearing ever-present headgear to keep us guessing as to the present state of his coif, Morris is still wowing fans old and new across the country.

The message is: savour our 1960s heroes while we can.  They’re a vanishing breed.