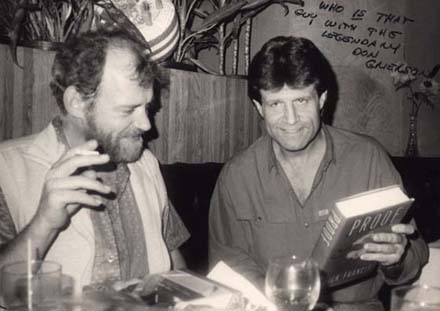 Few Australian if any know Joe Cocker on a one to one basis as Don Grierson one time Disc Jockey on 2DU Dubbo NSW. Don went to the USA to further his career in Radio, got a job in a record store and ended up one of the most respected executives and A&R people in the USA.

Many I knew in the LA music industry accredited Don with being the saviour of Joes’ career. Don is a very private person who would not blow his own trumpet. He was also the person to take me in and help guide me through the labyrinth of the music and radio world and opened many doors normally closed to Australians at that time.

Many other Australian performers owe him a debt of gratitude for the time and effort he put into their then stumbling careers in the USA. He was the man who joined the dots together in the “La la Land” (Los Angeles or to some not “The City of the Angels” but the City of the Angles) puzzle. I class Don as the brother I never had and he gave me 110% more than any brother could have given. He even forgave me after I blew up a can of baked beans on the stove and the kitchen rained baked beans for nearly twelve months, it was a very high wooden ceiling.

Along with a multitude of radio and records folk in the USA, Australia, England and Europe I respect his expertise and ability to spot the right song for the right talent, this is a true art form not found in too many humans populating Today’s music business. Even so it took some coaching for him to write about the person who became his close friend Joe Cocker and knowing Don it came from his heart not his wallet. I look forward to meeting with him in July and attempt to get more stories from behind the scenes in “La La Land.” Ken Sparkes

I had always been a fan of John Robert “Joe” Cocker, the mesmerizing wild man of rock n roll. I saw him live here in Los Angeles when he was a manic member  of Mad Dogs & Englishmen. That was a truly magical music moment for me. Years later, after my working my way up the ladder at Capitol Records, where I had become Vice President, Department Head, A&R, I found out he was working on a follow up album to “Sheffield Steel” but that things weren’t going well and it may be  possible to buy him out of that label deal and sign to Capitol.

I was able to make that deal happen and acquire the 5 tracks then in production. I brought in Gary Katz (known for his production work with Steely Dan) to record an additional 5 tracks. This became Joe’s first Capitol album “Civilized Man”. It did well in the US but became a best seller internationally, particularly in Europe. That album led to many more successful releases and a constant touring schedule, that continued until his untimely passing last year.

In many ways, Joe was a gentle soul. Yes, he had his demons and a stage persona to match but I found him to be a true soul man with a heart of gold. He always told me that:

“if he couldn’t emotionally connect with a song, he couldn’t and wouldn’t sing it” no matter that it might be good as a career move.

I feel this quote personified the man and his love for music.

The following announcement was recently made in the Los Angeles Times on February 19 2015:

The home of the late rock ‘n’ roll legend Joe Cocker in Crawford, Colorado, has been put up for sale by his wife, Pam, at $7 million. Set on 243 acres on the western slope of the Rocky Mountains, the 15,873-square-foot mansion was built to the couple’s specifications and had been their home since 1994.