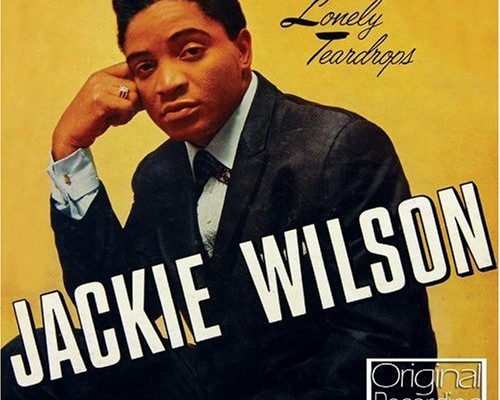 Jack Leroy Wilson Jr was born June 9 1934 in Detroit and was without a doubt one of the greatest movers and shakers in music his carefully chorographer on camera and stage appeared effortless. His stage craft influenced Michael Jackson and James Brown. Jackie’s first brush with fame was with Billy Ward and the Dominos singing lead tenor and moved onto to a solo career recording no less than 50 chart singles.

Jackie Wilson was described as one of the most influential artists of all time who helped put rhythm and blues and soul music on all the hit charts. I was privileged to meet him in California when I was a DJ on KGBS Los Angeles, although he had the reputation for being feisty his graceful easy nature towards me made me feel welcome and his past was not for me to judge. Sadly my interviews and photos with Jackie were lost in a house move.

Jackie’s hits included the classics “Reet Petite” and no one has ever topped his version of “Higher and Higher.”

His passing is a story of tragedy for one who was so active, at one time even a Golden Gloves boxer. During a Dick Clark Charity Concert in 1975 he had a heart attack on stage and fell into a coma, here is the really sad part, Jackie was in a coma for nine years, finally his body gave out and he went to Rock and Roll Heaven in 1984 leaving behind super hits like “Lonely Teardrops” and it was the song he was singing when he had the heart attack.

He had sung the line “my heart is crying” and he fell to the stage never to fully recover. He was only 49 years of age.

Napoleon X1V They’re coming to take me away