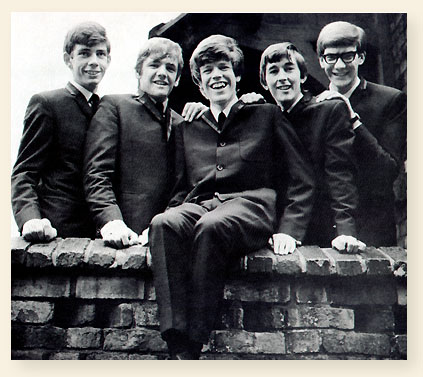 Many in the entertainment industry would not be aware of my early links with TV week as a journalist and feature writer. Most would recall me as the “voice” of the TV Week Logies for many years on the Nine Network. During my time in Melbourne on 3UZ, ATVO, ABC Channel 7 and 9 I was approached to by the then editor of TV Week Tom Ramsey to write a weekly column and feature articles. This week from out of the Archives an interview/article with Peter Noone then front man for Hermans Hermits mysteriously came to my attention. Did I remember the article? No… but I’m sure glad it was found!

So through the magic of today’s media we take you back to that interview and in upcoming Jukebox Saturday Night shows I will feature Hermans Hermits. Peter was a very quiet young man who enjoyed the adoration of young girls worldwide, in many of his TV and Concert appearances his performance, would like the Beatles, be drowned out by the hysterical screaming of teenage girls. They loved his boyish good looks and bought his records in the millions, some 54 million plus and still selling via compilation albums.

Peter Noone hailed from Manchester and his Mancunian accent really stood out. Thankfully he is still with us on Planet Earth and still tours, in April he’s in Denmark and August Australia, I hope to catch up and share some shaggy stories as I recall he was a real prankster on tour and have a laugh at how much has happened to both of us since I wrote this story. May get him to intro some insane video clips I found recently. Meantime let’s turn back the hands of time to the golden era of the British Music invasion.

A TV SPECIAL featuring Herman (Peter Noone) and his Hermits will be seen on 29 Australian channels during April. Here Herman chats with national compere Ken Sparkes during Herman’s recent national tour:

SPARKES: What do you require most from your group?
HERMAN: Well . . . loyalty. I need to know that I can rely on my friends and the Hermits are all my friends.
SPARKES: What did you think of Australia before you came out on tour?
HERMAN: I’ve always thought it was like a big England with more surfing beaches.
SPARKES: Now?
HERMAN: I think it’s cleaner and more like America in many ways.
SPARKES: You made your new film in America – what’s the title? – so how do you feel as a Manchester lad thrown into Hollywood?
HERMAN: It’s called Hold On and Shelley Fabares is the girl in it. Hollywood wasn’t as phony as everybody told me. Every day we kept the schedule of 6:00 am to 6:00 pm working on the film and then we used to go out. We never got any sleep. We’d stay out until 4:00 am and then head straight for the swimming pool – ’cause it’s always a bit warm. After a dive in the swimming pool we’d have to be up by six o’clock and be in there sloggin’ away – but it’s a good laugh.
SPARKES: Is this the sort of life you’d like to lead? Many people have said you are spending too much time in America.
HERMAN: No. I don’t think we are spending too much time in the States. I think if we played every night in England we’d get fed up with England. But as soon as we get to America we all want to come home. And after six weeks back in England we all want to go somewhere new.

SPARKES: Then you have the travel bug!
HERMAN: Yeah!
SPARKES: Do you prefer to be called Herman or Peter or Pete?
HERMAN: Pete! Herman was all right at first, but now the gimmick’s worn off and I ask all my friends to call me Pete.
SPARKES: What’s your name in full!
HERMAN: Peter Blair Denis Bernard Noone – also known as ‘erman!
SPARKES: Have you changed since you’ve hit the big time?
HERMAN: Yes. I’ve changed a lot, really. I used to be dead soft you know. I used to be, like giggling all the time. I still get star-struck – but 18 months ago I was unbelievably bad. I used to see Cliff Richard and I’d think “Oh! Cliff Richard!” And if we were doin’ a show with Cliff I’d think about it for weeks beforehand. I met Elvis in Hawaii. I was star-struck. He’s the king! I was like the model teenager. I went to see all the shows and got into riots and all that. Now the riots are happening to us. I feel left out.
SPARKES: So you can understand the teenagers now.
HERMAN: Yes, except the ones I saw were all rock and rollers and it used to be a lot more fun. You could bang the seats and stamp on the floor but obviously you can’t do that to any music.
SPARKES: When did you make your TV debut?
HERMAN: In 1960 on the Granada TV seriesKnight Errant – I’ll always remember it because I wore a four foot striped scarf and a part in my hair. The producer was switched from that show toCoronation Street and when he needed a lad he remembered me and gave me the role.
SPARKES: Who would be your greatest love?
HERMAN: My Mom and Dad – and Sooty.
SPARKES: Who’s Sooty?
HERMAN: She’s my two-year-old sister Suzanne. Before she was born I wanted to name her Tracey Ann but Mom said no, if it was a girl my older sister Denise could name her and if it was a boy I could pick the name. A girl it was, Denise picked Suzanne and I call her Sooty.
SPARKES: What does she call you?
HERMAN: Luvvy-Luvvy Herman. Suzanne was borrowed in a TV series called Mrs. Moore, You’ve Got A Lovely Daughter. After the show, she was showered with modelling offers – so watch out, Jean Shrimpton.

here’s the link where we found the articlefhttp://www.hermanshermits.com/articles/tvmags/apr16_66_tvw_p2.html 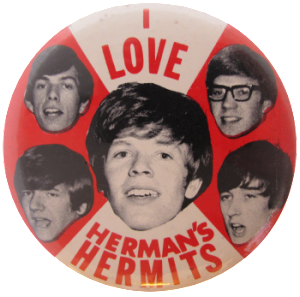