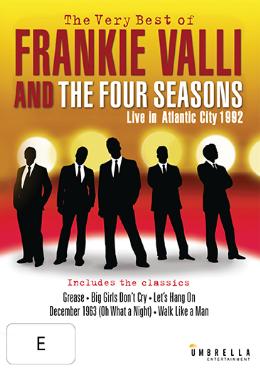 Frankie Valli and the 4 seasons

If you had said many years ago “they will not last” you may have been correct.

Frankie Valli and the 4 seasons came at a time when all as they say in baseball “all the bases were loaded.” Everyone with an inkling of talent wanted to be a rock and roll star. Seeing all the new talent shows and social media today nothing has really changed.

But it was a tough business to break into. Disc Jockeys in the USA like Alan Freed were at the forefront of discovering talent and had the radio show to play new talent records plus he had a passion. Freed promoted live show eventually moving into TV and film. Remember at that time Film was more powerful than TV, screen gems like “Don’t knock the Rock” “Shake rattle and Roll” “Rock Rock Rock” many still available to this day on DVD.

Dick Clark a Philadelphia DJ introduced so many new rock talents on American Bandstand and it became one of the most must watch TV shows in music TV history.

Both Alan and Dick were not performers and very limited when it came to singing the same applied to Australia’s Music host Brian Henderson. But each had the ability to spot talent, promote it and prosper from it.

Frankie Valli and the Four Seasons were one of the fortunate ones. Dick loved having them on his show and the fans bought the records by the millions they became the bestselling US group of all time selling nearly 200 million records around the planet and still selling. A long way from the first 45 rpm single “Sherry” in 1962 to 2016. Even during the Beatles Invasion of the USA they still managed to make the US top ten with “Lets Hang On”

The Jersey Boys musical play started in 2005 moved to Broadway and won many awards including 4 converted Tony Awards. The movie directed by Clint Eastwood was released 2014 then came the TV series all adding to the now growing legend of Frankie Valli and The Four Seasons.

There have been four stage productions touring the world and Australian audiences in their thousands flocked to enjoy and relive the music. It was a super box office success.

Recently on JBSNight we presented a complete show dedicated to this group with amazing audience reaction. Spurred on by this reaction we will feature another Frankie Valli and 4 Seasons show culled from the Umbrella Entertainment DVD “Live in Atlantic City 1992.

The DVD features the very best hits in a dynamic performance with Frankie’s unmistakable Falsetto voice still souring to great heights even after 4 decades of performing. Opening up with “Working my way back to you 1966” finishing up with “Lets Hang On 1965” as he greets the audience with handshakes, many who were not born in 1962, lovely scene when a little girl in red aged about ten comes up to shake his hand and Frankie bends down and kisses her hand.

Give me a head with hair, shoulder length or longer