One of the forgotten Dig Richards.

For reasons only known to the maker this week my thoughts focused on Aussie singer Dig Richards and I was moved to honour his memory.

I recall going into a recording studio in McMahons Point Sydney to record a J&B television voice over when the Labels representative told me the news that Dig Richards had died. The bloke was never known for his tack and I went to the phone to make sure the news was correct. Bottom line is that I never trusted this bloke and years later he stayed at my Melbourne apartment and helped himself to my then rare record collection plus a water ski. So my instinct was right, check him out.

Sadly Dig had passed away and my first thought was ,”but he was so young” he was only 42 few, including myself, were aware that he had suffered from pancreatic cancer for over twelve months.

In the record industry he’d dropped off the charts his last charted single was the 1975 re-recording of” Rain Coat in the River” a record that became his best known hit from 1962.

Dig was one of the band of artists who became the backbone of the Australian music Industry and we’d met during a recording of The Channel 7 Johnny O’Keefe Show. JOK had a big call for him and he was a frequent guest as John had a giant say as to who appeared on his show.

Digby George Richards was born in the Central Western town of Dunedoo, a town I was very familiar with as during my time at 2MG Mudgee I sold advertising in his birthplace and covered the local football with station manager Ron Camplin. We often joked about our time in the bush and longing to make it in the “big smoke” At seventeen Dig made the break and moved to Sydney forming the R’JAYS with guitarist Jon Hayton his gamble paid off and he was signed by Festival Records in 1959 releasing “I wanna Love you” that made the Official 2UE Top 40 then the Cities biggest music chart, it made the Top Ten.

I never found him boastful and considered him a quiet easy going bloke who spoke no ill of any fellow performers he would turn up on time for interviews and TV appearances, do his job and go home or to another commitment.

Like his mate Johnny O’Keefe in 1959 Dig was involved in a shocking car accident he remained in Hospital for three weeks and his handsome face scared but not badly. A two inch war wound we would say. JOK was not so fortunate his 1960 car accident was a real shocker and he suffered severe facial injuries that plagued him until his death in 1978 at only 43.

I am not sure on this Good Friday 2015 I have done his memory proud but hopefully his surviving loved ones will know he is remembered and respected by those who worked with him on TV and played his records on Radio. I will include him in our JBSNight Rock and Roll Heaven segment in the near future. 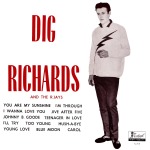