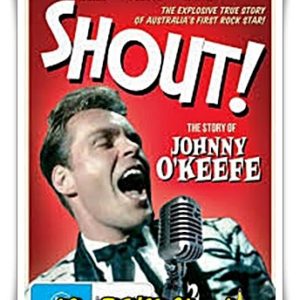 Shout the Story of Johnny O’Keefe

The dramatic true story of one of Australia’s greatest music sensations, SHOUT! THE STORY OF JOHNNY O’KEEFE

The dramatic true story of one of Australia’s greatest music sensations, SHOUT! THE STORY OF JOHNNY O’KEEFE stars Terry Serio (33 Postcards) as the larger than life rock’n’roller who spectacularly burst into the limelight and left behind a blazing trail of popular tunes and adoring fans.
Tough, pushy, passionate and desperate to be loved, Sydney’s Johnny O’Keefe fought his way to the top in the 50s to become the King, Australia’s first international star of rock and roll. At a time when Australia was a provincial outpost of America, when sex was out of bounds and Bill Haley and Elvis Presley were everyone’s heroes. JO’K captured a generation who called him the Wild One.
Also featuring John Polson (Blood Oath), Melissa Jaffer (The Harp In The South), Ian ‘Molly’ Meldrum and Nique Needles (Dogs In Space) as loveable crooner Col Joy, SHOUT! THE JOHNNY O’KEEFE STORY tells a bold tale of success and excess during an exciting era of popular music