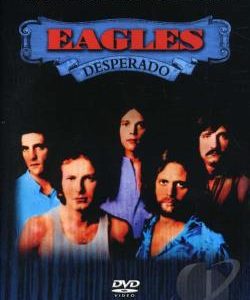 Including dynamic performance footage of the band in their 70’s heyday The Eagle were by far one of the biggest Country Rock Music bands of the decade!

In 1973, The Eagles released their second studio album, Desperado – an album that provided them with their signature tune and announced the arrival of a major new talent in the field of country rock music. In this unique re-appraisal of one of the seminal works of the genre, the legendary broadcaster Bob Harris (The Old Grey Whistle Test) takes us back in time to Los Angeles in the 70s – the place and time provided the backdrop for The Eagles’ unique and unmistakable sound. Bringing his own professional insight, Harris reflects on Desperado’s depth and appeal, investigating how the sound of the dry and dusty American west travelled the world and left an indelible impact. Including dynamic performance footage of the band in their 70’s heyday and featuring interviews and in-depth analysis from several respected music journalists such as Barney Hoskyns, Peter Doggett and Johnny Rogan, this program details the virtues and strengths of a landmark album featuring popular tracks such as Tequila Sunrise, Outlaw and the much-covered title song Desperado.