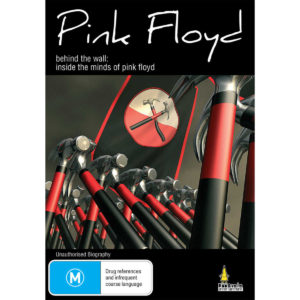 PINK FLOYD: BEHIND THE WALL

One of the most influential outfits in the world, Pink Floyd began life as a humble run-of-the-mill R & B band in the late 60s, but set out to redefine a sound and take it to a new and inspiring level, selling over 200 million albums worldwide in the process.
A rare look at the most legendary art-rock band of all time Pink Floyd: Behind The Wall explores the band’s remarkable past, from its first dynamic incarnation of Roger Waters, Nick Mason, Richard Wright and the lively innovation of Syd Barrett, through the inclusion of David Gilmour, the triumph of their feature films Live at Pompeii and The Wall, to the bittersweet smash of Wish You Were Here.
Featuring revealing anecdotes, interviews and rare performance footage Pink Floyd: Behind The Wall chronicles the band from their auspicious beginnings to the Billboard Album Chart champion of all time, Dark Side of the Moon.