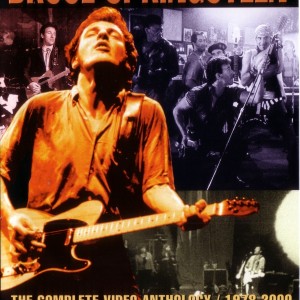 This is the collection that every Bruce Springsteen fan has been waiting for: a complete anthology of every video released, plus previously unreleased and rarely seen bonus clips.

Now available on DVD for the first time is an expanded version that includes new clips made since the original home video release in 1988.

When Springsteen became part of the music-video surge of the mid-1980s, he did so with a vengeance, hiring Brian De Palma and John Sayles to direct him in such MTV staples as “Dancing in the Dark” (featuring an early appearance by Courteney Cox), “I’m on Fire,” and “Glory Days,” with the latter two featuring Springsteen doing some genuine acting. For his videos from TUNNEL OF LOVE, Springsteen turned to Meiert Avis, who had previously worked with U2, and they made, among others, a fascinating video for “Brilliant Disguise,” which was done in one long, slow camera zoom on Springsteen sitting on a chair in a kitchen, singing live vocals. The first disc starts and ends with concert performances, going from “Rosalita” and “The River” to “Spare Parts” and the acoustic “Born to Run.” The second disc begins with videos from the HUMAN TOUCH and LUCKY TOWN albums, followed by Springsteen’s work with Jonathan Demme, Tim Robbins, and Sean Penn, including a 2000 performance of “If I Should Fall Behind,” featuring each member of the E Street Band taking a turn at the mike. Taken as a whole, this collection is a terrific overview of Springsteen’s work, from his early, crazier days to the later, more introspective work he has done since he has gotten married and had children.

5. Dancing In The Dark

16. Tougher Than The Rest

31. If I Should Fall Behind