Home Product AC/DC: Classic Albums Under Review – Back In Black

AC/DC: Classic Albums Under Review – Back In Black

AC/DC – Back In Black 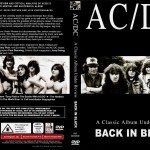 AC/DC: Classic Albums Under Review – Back In Black

“Back in Black is not only the best of AC/DC’s six albums, it’s the apex of heavy-metal art: the first LP since Led Zeppelin II that captures all the blood, sweat and arrogance of the genre. In other words, Back in Black kicks like a mutha.” Rolling Stone, November 1980.

This classic rock documentary is the ultimate reveiw and critical analysis of AC/DC’s most influential and successful album, recorded in

the year after Bon Scott’s alcohol-related death. Including rare footage, band interviews and live performances of the classic hits “Hell’s Bells”, “Shoot to Thrill” and many more, the entire album is dissected track by track by a panel of esteemed experts. Comment, criticism and insights come from AC/DC author Clinton Walker engineer for the Back In Black and Highway To Hell sessions Tony Platt, rock journalist Malcolm Dome and AC/DC biographer Paul Stenning, making this one of the most comprehensive explorations of an extraordinary band.