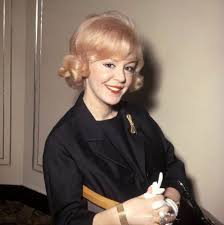 We’ve been going back through the files and over some old shows and noticed a number of Rock N Roll Heavens that didn’t make it to the website.

On Episode 43 November 14th Kathy Kirby was featured in our nostalgic segment Rock N Roll Heaven. The below is a quick re-work of the script that went to air.

Kathleen O’Rourke was born 20th October 1938 in Essex England and became known as the blonde bomb shell Kathy Kirby. With a Marilyn Monroe-esque look and gloss red lipstick, Kathy appealed to both teenage fans and their fathers and was nicknamed “WetLips”.

Originally she held ambitions to be an opera star and whilst she did not fulfill that ambition,  through her classical training,  developed an extremely strong singing voice that would capture the hearts of millions of fans and record buyers. After a string of big hits like “Dance On” (whoch went to number 1 in Australia), a cover of “Secret Love and the single “Let Me Go Lover”,   Kathy became Britain’s entrant to the Eurovision Song Contest where she came second place singing “I belong”. Between 1965 and ’67 Kathy ruled the airwaves in the UK and although only having one chart success in the US, it did nothing to diminish her massive star appeal.

Kathy’s personal life was a real tragedy, told in great detail in the 2005 biography and in 2008 a stage show about her life. She would struggle in later life with schizophrenia and was given help by her niece Lady Sarah Thatcher wife of Mark Thatcher… passing to RNRoll Heaven 19th May 2011

Was this the first Moonwalk?