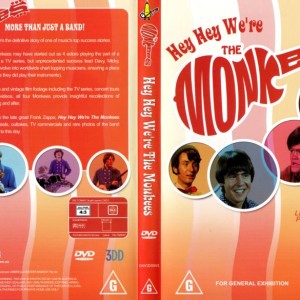 Don’t be the Last one on the train to clarksville!

MORE THAN JUST A BAND! Here’s the definitive story of one of music’s top success stories. The Monkees may have started out as 4 actors playing the part of a rock group in a TV series, but unprecedented success lead Davy, Micky, Peter &amp Mike to evolve into worldwide chart toping musicians, ensuring a place in pop music history (and yes they did play their instruments.) Through brand new interviews and vintage film footage including the TV series, concert tours and their pioneering music videos, all four Monkees provide insightful recollections of Monkee mania – before – during and after. With a special appearance by the late great Frank Zappa, Hey Hey We’re The Monkees also includes original screen tests, outtakes, TV commercials and rare photos of the band who continue to tour the world to this day. Featuring: Daydream Believer, Last Train to Clarkesville, Pleasant Valley Sunday.