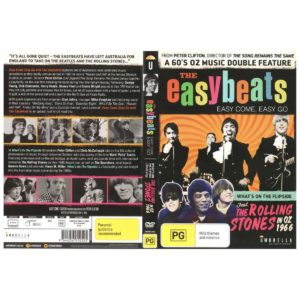 Easy Come Easy Go with The Easybeats captures one of Australia’s most celebrated music sensations as they boldly venture abroad in 1967 to record ‘Heaven and Hell’ at the famous Olympic Studios in London. Director Peter Clifton (Led Zeppelin:The Song Remains The Same) pieces together a playful fly-on-the-wall film detailing the band during their triumphant heyday. Following George Young, Dick Diamonde,Harry Vanda, Snowy Fleet and Stevie Wright around in their VW Kombi Van, they not only perform and discuss their hit tunes, but let off some steam with a hand of poker, a round of golf, a kick of the soccer ball and a jaunt in the North Sea on Pirate Radio. With guest appearances from engineer Glyn Johns, manager Mike Vaughan and featuring many of their classics: ‘Wedding Ring’, ‘She’s So Fine’, ‘Saturday Night’, ‘Who’ll Be The One’, ‘Heaven and Hell’, ‘Friday On My Mind’ and a Scottish themed ‘Loch Lomond’, Easy Come Easy Go with The Easybeats is an upbeat rock’n’roll road trip.

In What’s On The Flipside filmmakers Peter Clifton and Chris McCullough take on the 60s cultural phenomenon of music through renowned Sydney radio disc jockey of the time Ward ‘Pally’ Austin. Featuring interviews and on-the-job footage, as Austin spins vinyl and spends time with international sensation The Rolling Stones on their 1966 Aussie tour, as well as The Searchers, local legend Normie Rowe andpromoter Harry M. Miller, What’s On The Flipside is a fascinating and rare insight into the Australian music scene during the 19